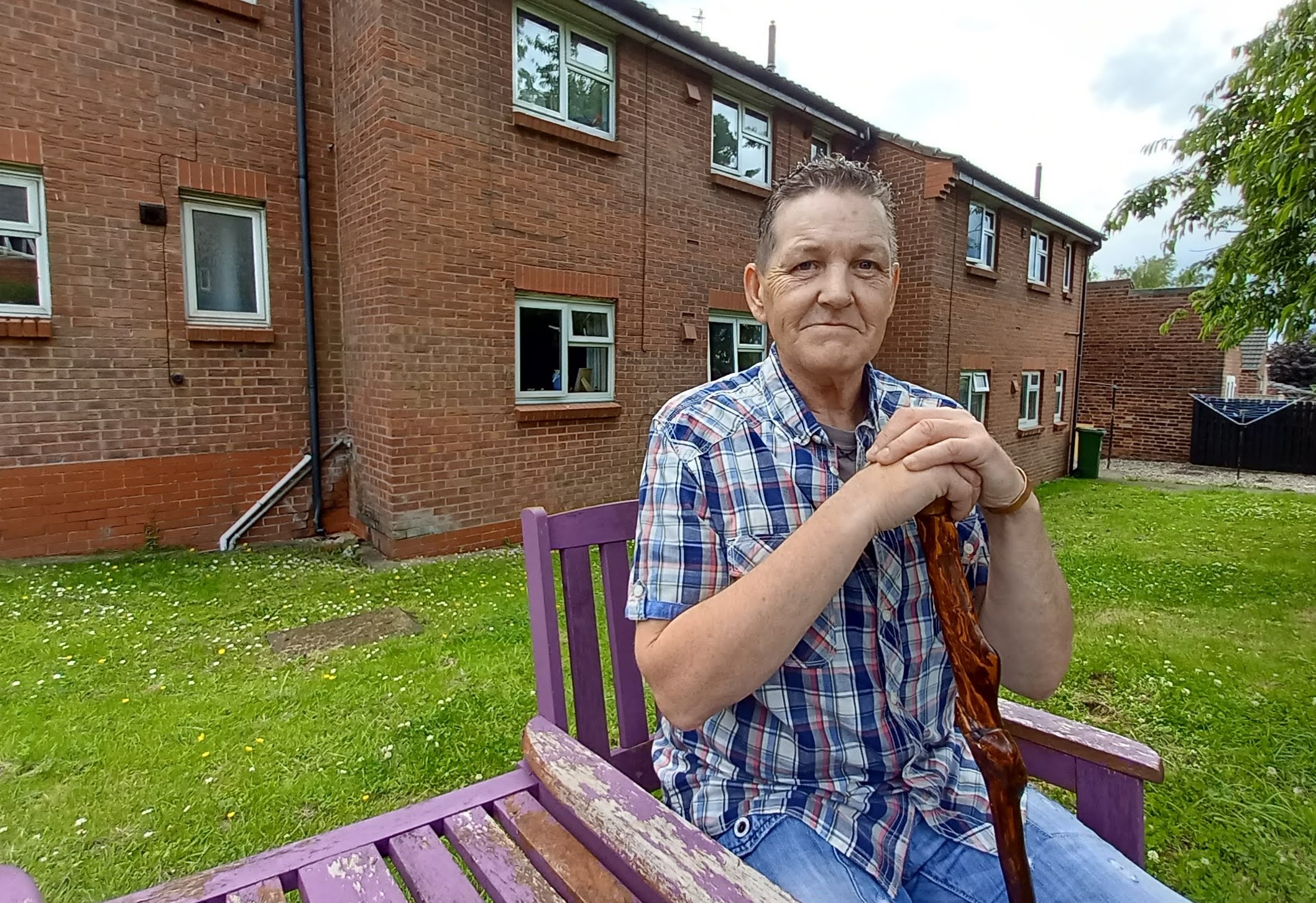 A Riddings man who faced being homeless because he struggled with the paperwork necessary to get himself a new place to live has said thank you to a project worker for “saving his life” – and donated money to help people just like him.

Stephen Fletcher, who at one stage last year was bedding down in a horsebox and taking Class A drugs after his life fell apart, says that he owes everything to project worker Julie Howells after she turned his life around.

Julie is head of employability at Derventio and manages the Opportunity and Change project, which supports people facing severe and multiple disadvantage in order to reintroduce them back into the community and work.

She started working with Stephen in December last year, just before he had to leave the home he had lived in all his life. The 54-year-old had always lived with his mum but after she died in May, the house was put up for sale and Stephen was given six months to find an alternative place to live.

However, Stephen, who struggles to read and write, was unable to meet the challenge of re-homing himself and instead slipped into drug addiction and spent nights on end sleeping in a horse box or sleeping at friends’ houses.

With the six months running out, and his belongings still in the house, Stephen was referred to Derventio and Julie took him under her wing and started the long process of finding him a new home, which included getting him a bank account, hiring a removal firm, sorting out his housing benefit and registering him for council tax and utilities.

It also included helping him to deal with criminal proceedings after he was arrested for possessing a Class A drug.

Eventually, in February, Stephen moved into a flat owned by Futures Housing Group – Julie even helped to furnish his new home – and is now facing a brighter future, with his drug-taking days behind him and all his paperwork intact.

As a result, he has now donated £50 to Derventio’s Empowerment Fund, which hands out money to the people it works with to buy them essential items such as furniture, documents such as birth certificates or equipment for hobbies.

It’s a lot of money for me but I am so grateful to Derventio and Julie because I really don’t know where I’d be without them, and her. I can’t thank her enough, she’s my guardian angel.

At the time I was a mess, I didn’t know what was happening. I didn’t have anywhere to live, I was depressed and I was on drugs. I needed my life cleaning up and Julie did that for me.

I’ve got a lovely flat now and Julie is still in contact with me and helping me, so I wanted to give something back. It’s as much as I can give but I would have given more if I could because of everything that she has done for me.

When I first met Stephen he was going between sleeping in a horsebox and sofa-surfing, or returning to his mum’s house because he had nowhere else to go.

He knew that he had to move on somewhere, but he wasn’t in the right place to be able to make the move, to put it lightly. He had fallen in with the wrong crowd and because of his reading and writing he wasn’t able to deal with the letters and forms that he needed to address, so he needed help.

It’s taken a lot of work to get him to where he is and it’s wonderful to see, and for him to make a donation of £50 to the Empowerment Fund is a wonderful gesture because to him it’s a significant amount of money and will really help someone else further down the line.